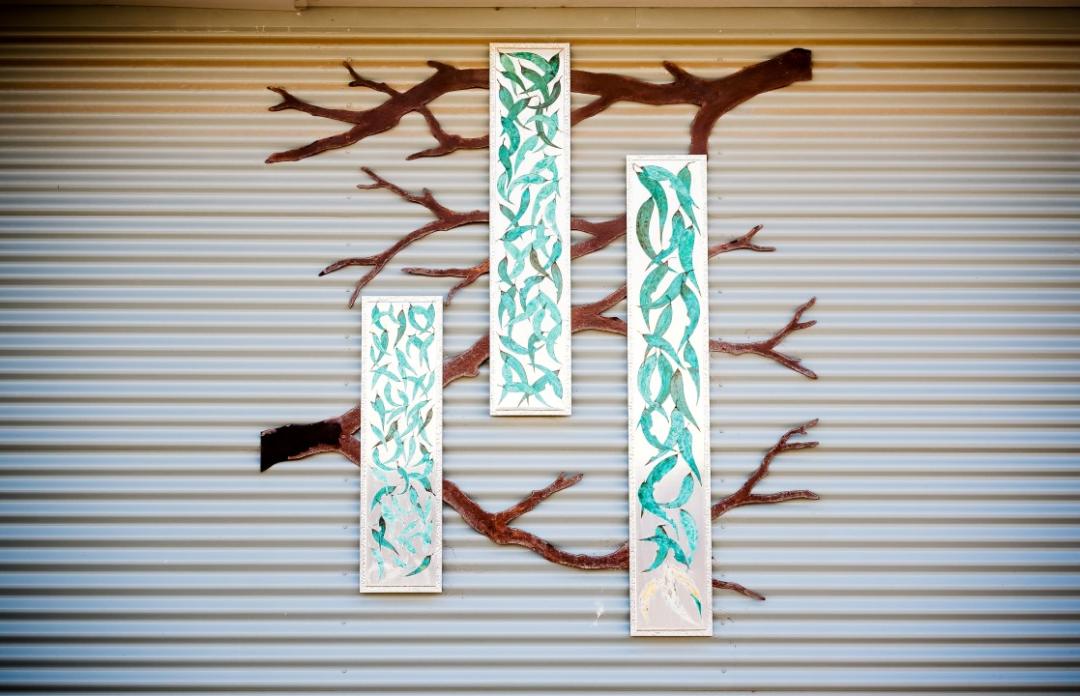 We are continuing our whole site anti-bullying focus this term and working through some whole school shared resources to ensure a consistent message across the school.

Classes are currently exploring what the term ‘Bullying’ means.   The national definition of bullying for Australian schools says:

"Bullying is an ongoing misuse of power in relationships through repeated verbal, physical and/or social behaviour that causes physical and/or psychological harm. It can involve an individual or a group misusing their power over one or more persons. Bullying can happen in person or online, and it can be obvious (overt) or hidden (covert).

Bullying of any form or for any reason can have long-term effects on those involved, including bystanders.  Single incidents and conflict or fights between equals, whether in person or online, are not defined as bullying."

Along with discussing WHAT IS bullying and the impacts of bullying, we need to understand what IS NOT bullying, and these behaviours include:

•           mutual arguments and disagreements (where there is no power imbalance)

However, these conflicts still need to be addressed and resolved.  Working with children to find a kind way to resolve conflict is important, as are building skills of resilience to manage these situations that will occur throughout their lives. 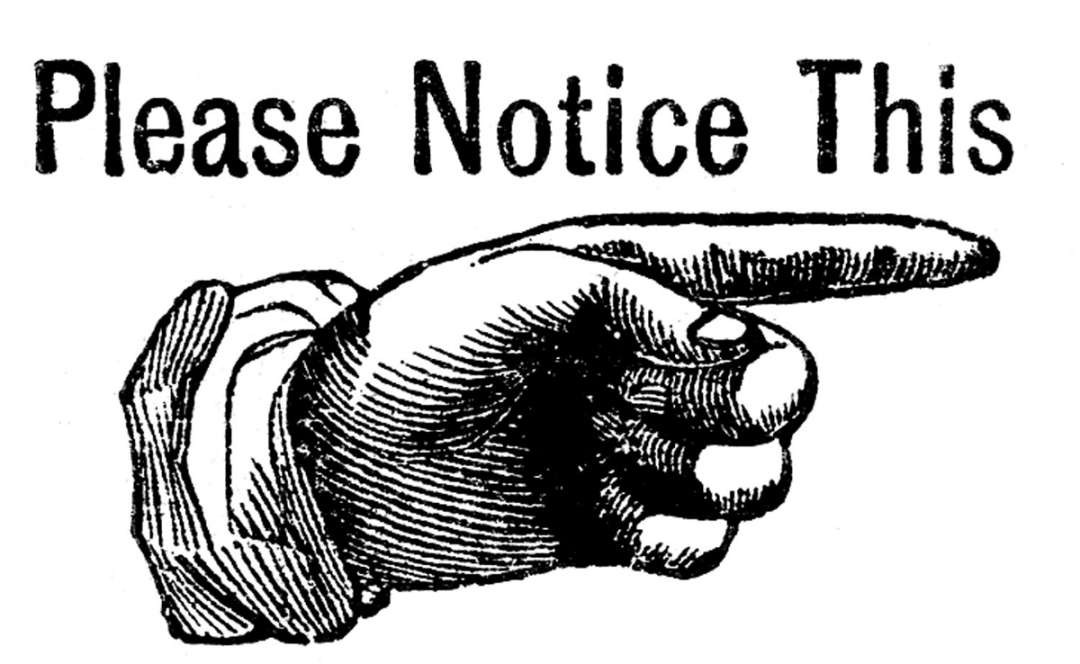 Term planners are sent home at the start of each term, please make sure you keep yours somewhere visible. Extra information is sent through Skoolbag and Seesaw (have you got the apps?)

We will once again be hosting students from Korea during term 3 from 30/07/2019 to 16/08/2019.  The students attend school and also excursions and activities with their homestay buddy.  There is payment for hosting a student and they are able to 'double up' (you could have two!).

Hosting an exchange student is an excellent way to learn more about a different culture.   Please see Carmen in the front office if you would like some more information. 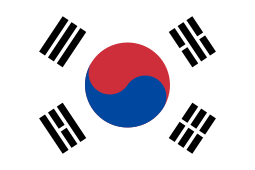 Families of year 7 students recently received information about transitioning to high school in 2020. This paperwork needs to be returned to your class teacher as soon as possible. Please contact the front office if you require more information.

We value volunteers at Willunga Primary and if you would like to volunteer you just need to drop in to see Carmen in the front office for a volunteer booklet.  This booklet clearly shows the process and online courses that need to be undertaken.  Carmen will also arrange a meeting with Karen Matthews at a convenient time for an induction.

A reminder that anyone on site after 9.00am, must be signed in through the front office and have completed the volunteer process.

As you are aware, yesterday was the first day of NAPLAN, which our school is doing online. Unfortunately some connectivity issues were experienced during the test and these issues are currently being investigated. The issues with the testing platform were experienced nationally.

While this isn’t ideal, be assured we have procedures to follow to minimise any impacts on our students, including rescheduling the test if required.

National test authorities have advised they regret any inconvenience this has caused to schools and students, and are working to rectify the issue as soon as possible.

We are proud to say our year 5 and 7 students demonstrated great RESILIENCE throughout the testing on Tuesday.

Congratulations to the following students who will be representing the Onkaparinga South District at the Track & Field Metro Championships on May 21. The event will be held at the Athletics SA Stadium. We wish them luck!

The following sports are now open for nominations to trial for selection in the South Australian State team:

Information re the selection criteria, trial dates and carnival details is available from the front office. Families are responsible for nominations.

At Governing Council we  approved all Student Free Days and the School Closure Day for this year.  By being this organised we can support you to arrange care for your children on these days.  They will also appear in the term planners and in the diary dates of the newsletter.  I have communicated these dates to the high school, but am aware that they will need to manage their own priorities that at times cannot help but conflict with ours.

Twenty-one eager Willunga students did themselves proud at the Onkaparinga Day at Noarlunga Downs Primary in week 10 last term. Racing up and down hills on a warm and sunny day, they pushed themselves and showed great stamina and teamwork. And none got lost!

As the day warmed up, the final runners were supported by water bottle holders from the rest of the team, who organised themselves strategically around the course to liberally soak their teammates and provide a little boost of encouragement. The CFS would have been proud. Great teamwork guys!

It’ll be District Day next for some of our runners. Good luck to them as they train hard and well done to everyone on the team:-

Have you seen the front of the school recently? Our meeting circle is complete, providing a space for a class to gather for a community circle or a learning activity. John also tidied up the gardens at the front and along Station Road. OSHC children have been preparing raised garden beds for vegetables and flowering plants. It looks amazing and the setting is ideal for outdoor learning. Thank you John!

We are awaiting the installation of the screens to add the finishing touch.

In week 1 John also installed six signs acknowledging we are on Kaurna land. These were sourced through 'A Sign of Respect' which is a community driven social enterprise (sustainable business that exists for social impact) promoting culturally safe and respectful neighbourhoods by providing practical ways for local people and businesses to show respect First Nations peoples.

Alan Sumner, a past parent, designed this particular sign. This artwork represents the land and waters of the local region. 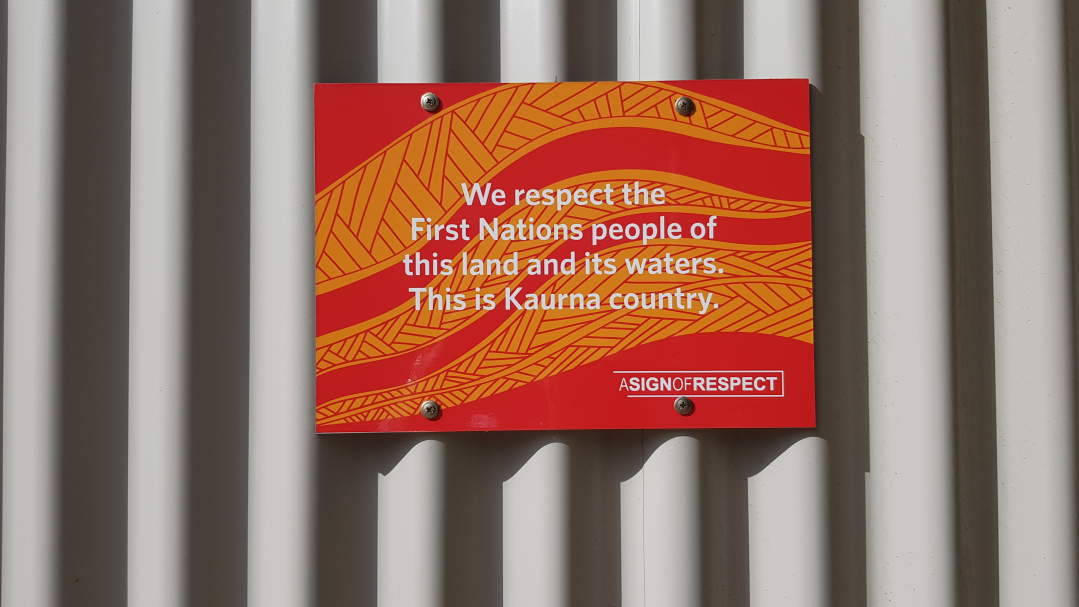 During the last few weeks of last term we were busy setting up our garden area in front of the OSHC building. OSHC students have helped with getting the area level, setting up the garden beds and using the wheelbarrows, shovels and rakes to fill the garden beds with soil. Now that we have let them settle, we will be planting seedlings and plants very shortly.

Focusing on this, everyone has been adding their suggestions to what they would like to see grown in our garden beds. We have also researched what varieties of vegetables and herbs are best to plant at this time of year.

Come and take a look at our progress with the garden but please be careful where you step when you visit as little plants will be trying to grow. Will you be able to notice the changes over the next few weeks? Watch this space!

OSHC will be available on the day, booking are essential.

Parent Morning Tea is on every Tuesday! Come to the OSHC room after dropping off your children for a coffee and a chat. This is a great time for parents to connect and get to know each other.

Starting last term, I have been collecting the leftover bread each day from the new Caltex across the road.  This bread is kindly donated by Steve and the team from the Caltex which enables us to pass bread on to some of our families in need.  We really appreciate the local petrol station supporting our school in this way.

One of the things that people tell me they love about the holidays is not having to make school lunches every day. During the holidays I went to Japan and was amazed at the bento box lunches they have.  You could buy lots of different cutters, special rice holders, cellophane fake grass, little animal muffin shapes plus loads more to make that lunchbox look amazing! I was certainly glad I didn’t have that pressure when my children were at school.

One simple idea a friend told me was using puff pastry to cook left-overs in it.  I would use a triangle of puff pastry and fill it with tuna mornay, spaghetti, casseroles, whatever I had.  My children loved having something a little different and it would use up left-overs and reduce waste of food. Another bonus is they could be put in the freezer once made. Now school is back into full swing and lunches are needing to be made again, if you have any easy lunch ideas let me know and we can add them to the newsletter.

MasterChef will begin in week 4 for any of the year 6&7’s who would like to sign up.  The first challenge is ‘Name that Ingredient’.

‘As they say in the movie Ratatouille, “Anyone can cook!” Planning and preparing meals are important life skills that even elementary-age kids can learn’. 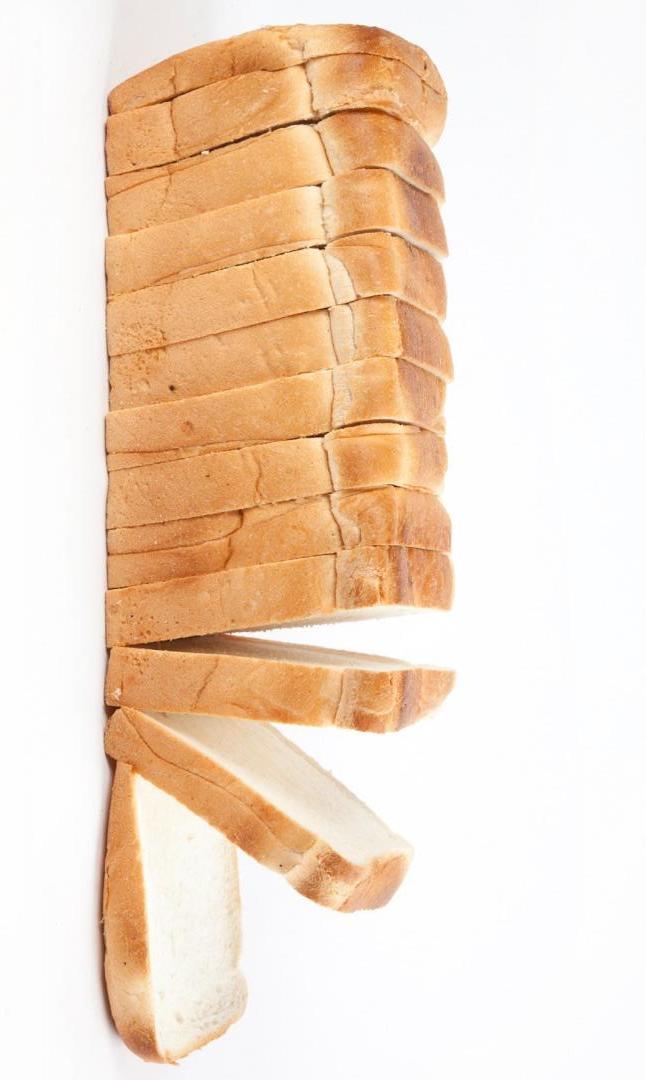 Well done to Francesca S who was selected as a member of the SA Public Primary Schools’ Choir!  We look forward to hearing all about it :)

Congratulations to Lilly M   who competed in an archery competition in Armidale during the holidays and came home with two silver medals in both the long (144 arrows shot from 40m, 30m and 20m) and short ranges (72 arrows from 30m on a smaller target face – 80 cm), a bronze medal in the field tournament (72 arrows shot from a range of distances ranging from 5m back to 40m with varying size target faces), and a bronze medal in the clout event (36 arrows shot from 125m away onto a target arranged flat on the ground).

During the short target event she also shot new state records, and claimed the silver medal by 1 point!

Parenting is definitely the hardest task we undertake in our life.  We want what is best for our children, but sometimes struggle to know what that is, or how to help them develop the skills they need to be successful in their own life.  To assist you, Willunga Primary is hosting parenting sessions again in term 2.

All are welcome to attend – bookings through the front office. Sign up for all 3 or just the one that interests you. 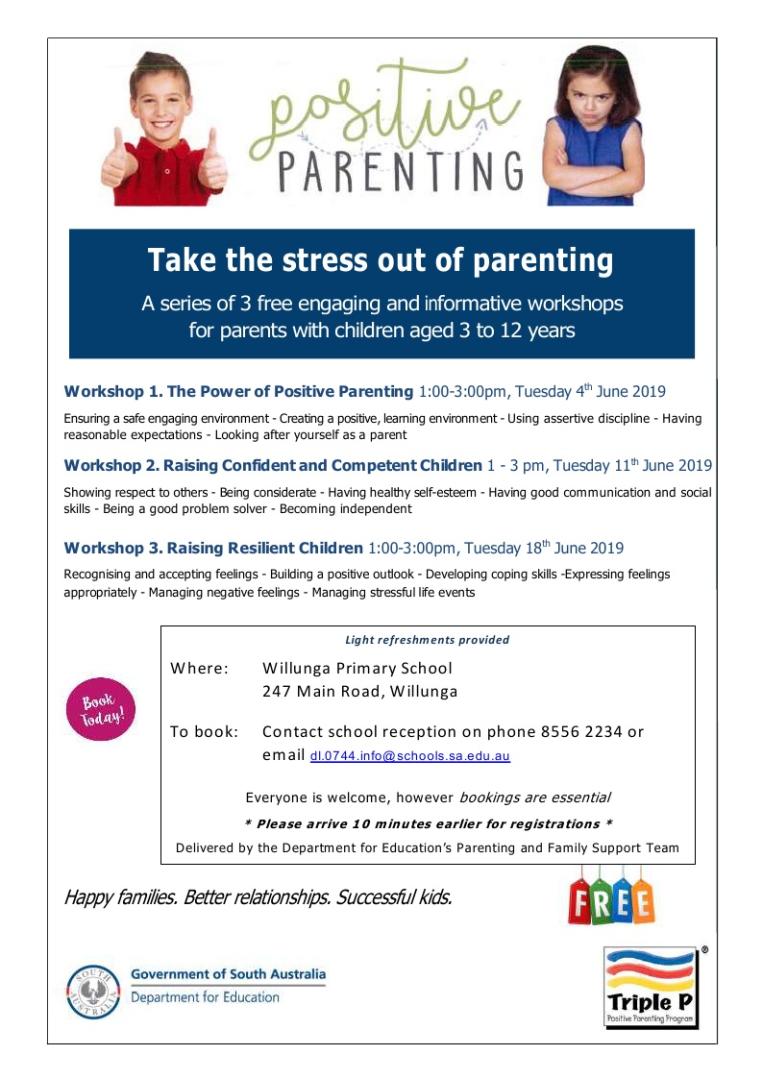 Students who will be away from school for more than 3 consecutive days need to apply for an exemption. This is a Department for Education requirement and application forms can be collected from the front office. 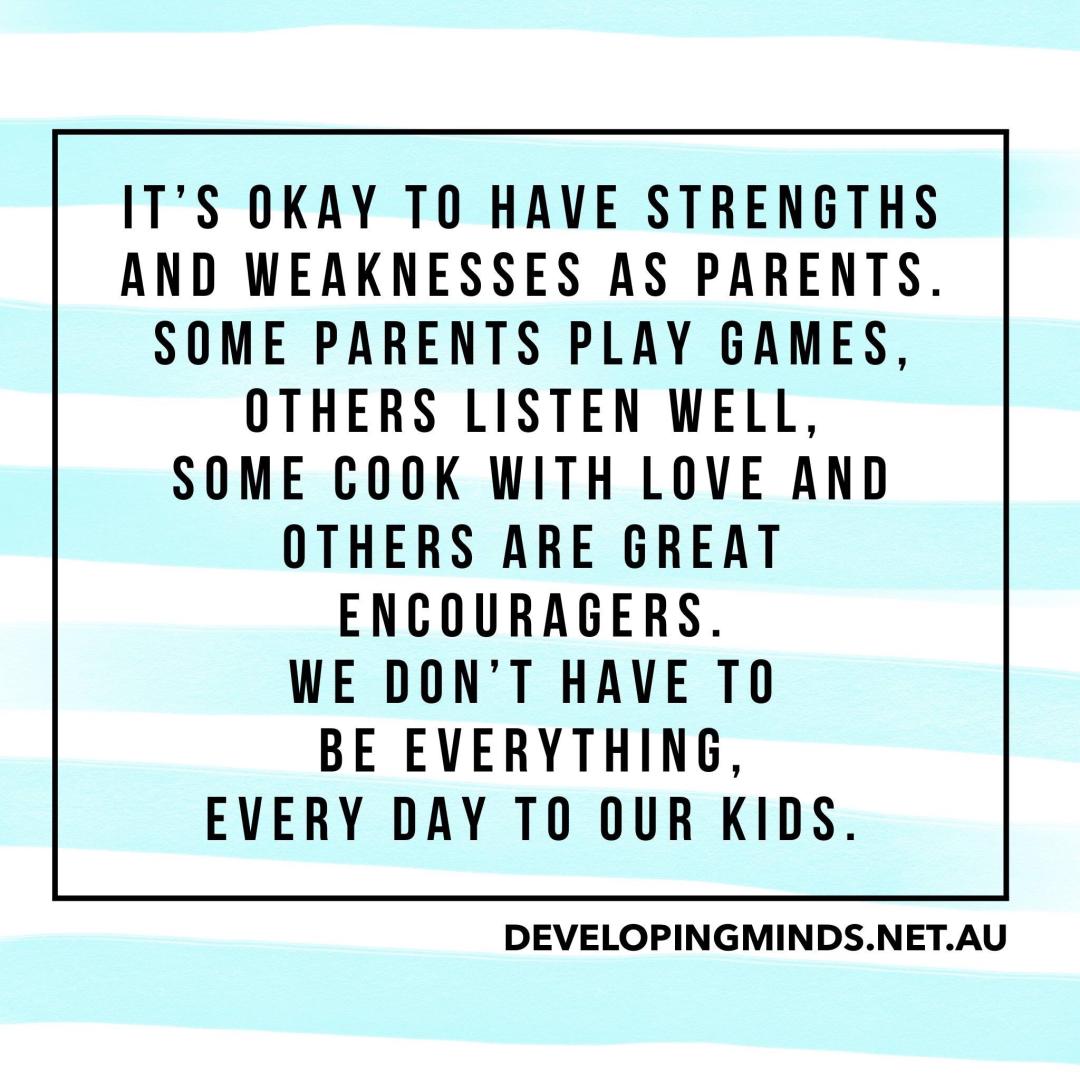 A reminder that as a Department for Education site, dogs are not allowed on school grounds. This includes the football oval between 8.30am and 3.30pm, and at drop off and pick up times. 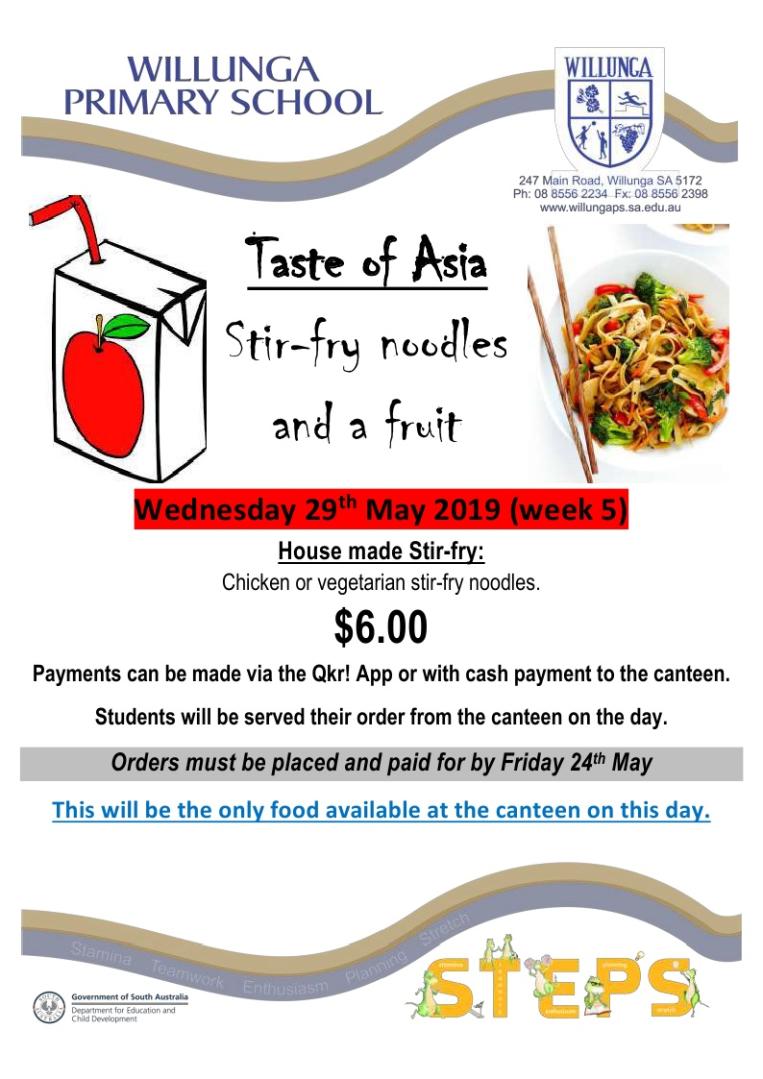 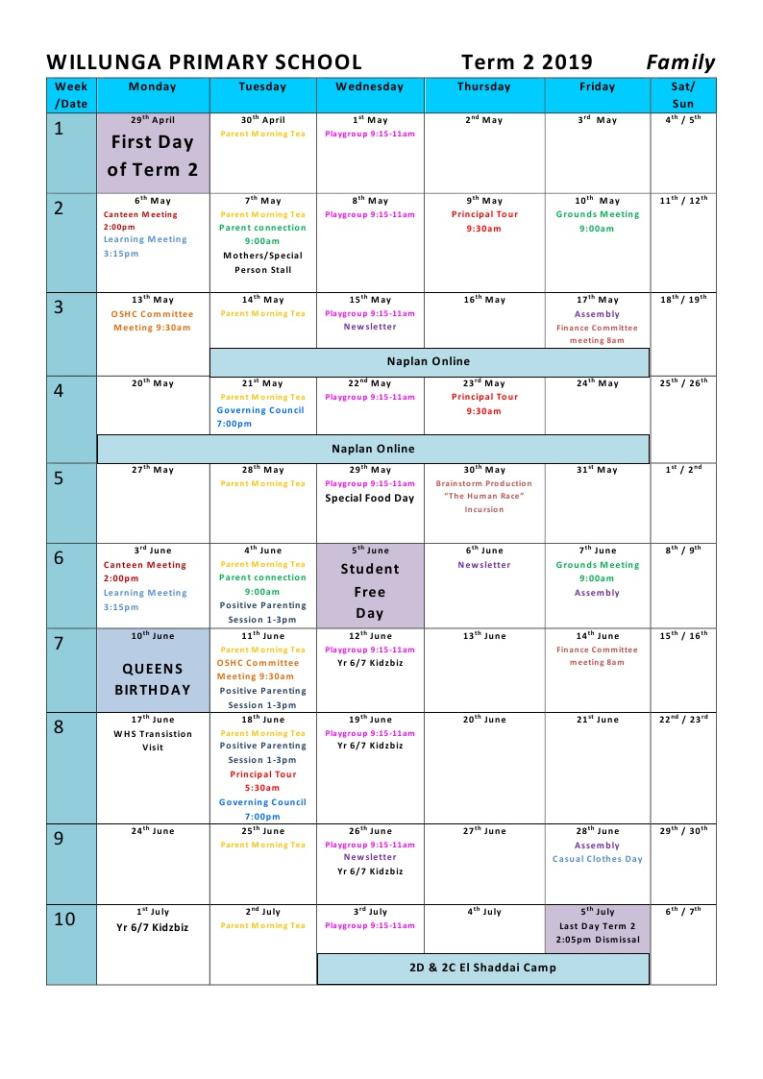 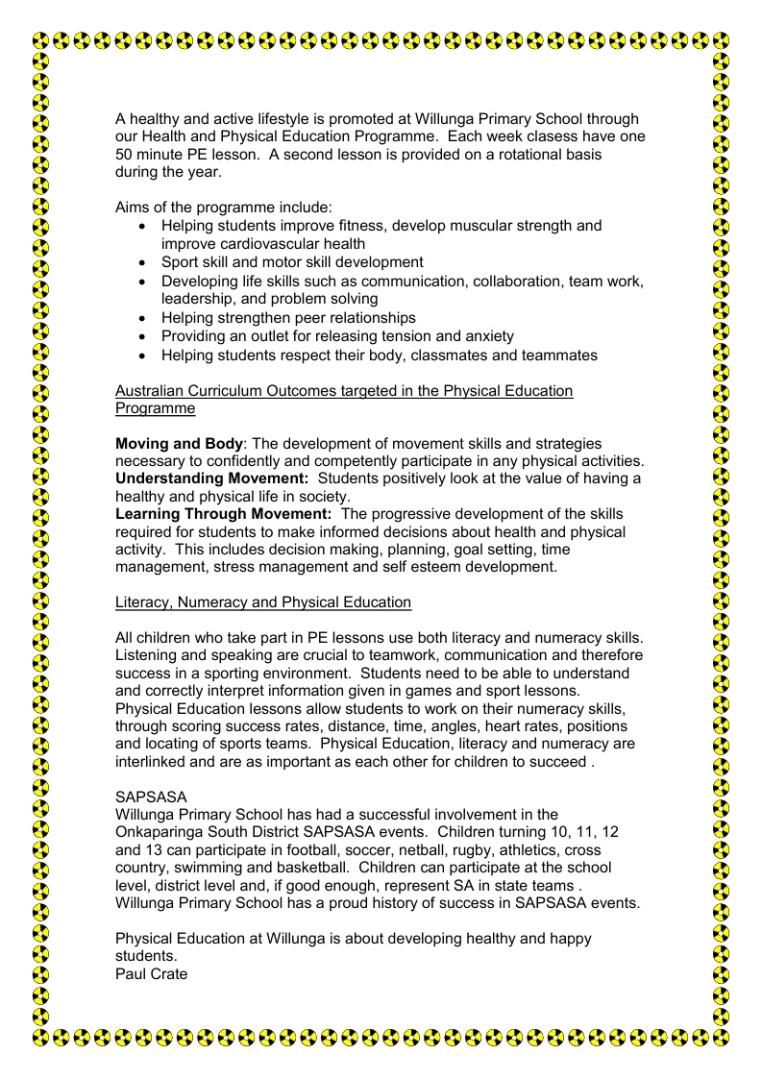 The Willunga Almond Blossom Festival is celebrating 50 years this year. The festival is on again from the 27th - 28th July. 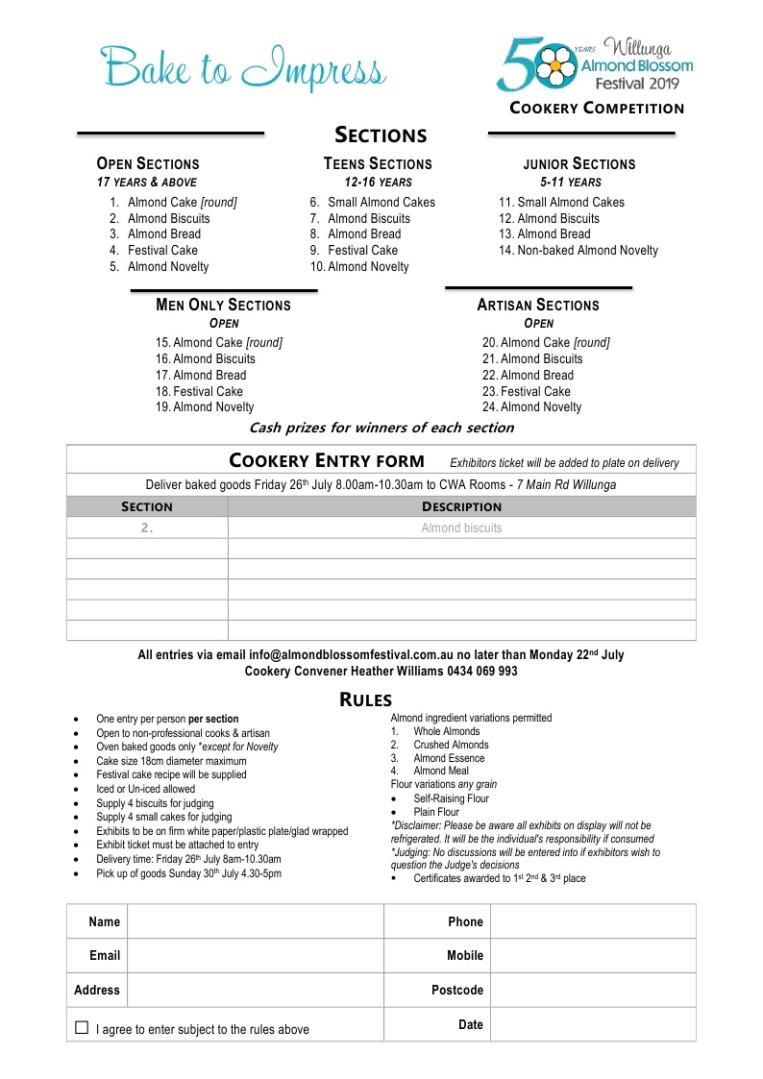 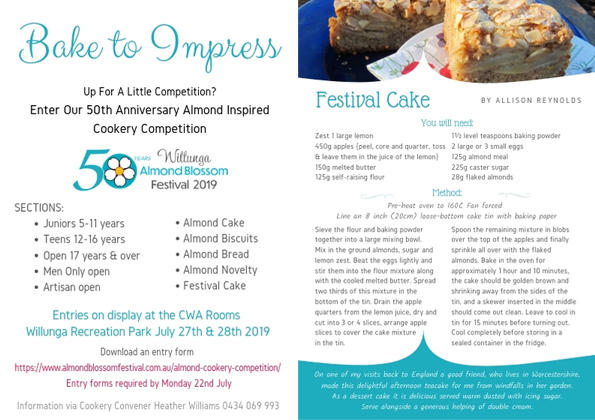 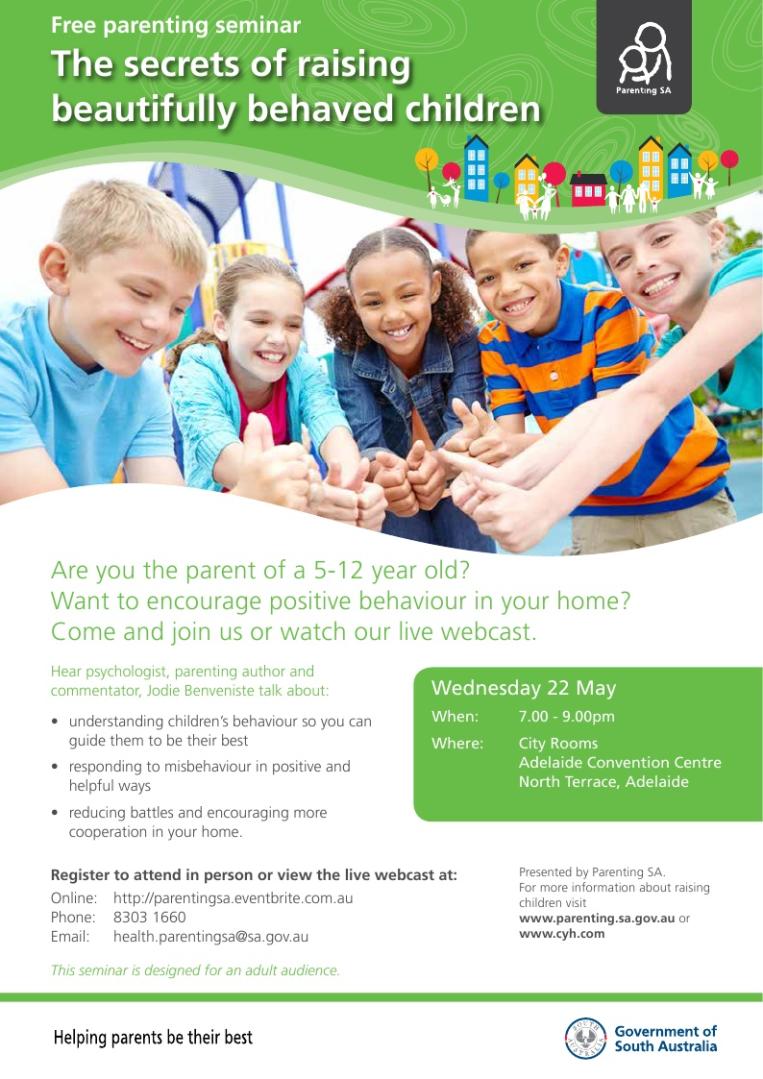 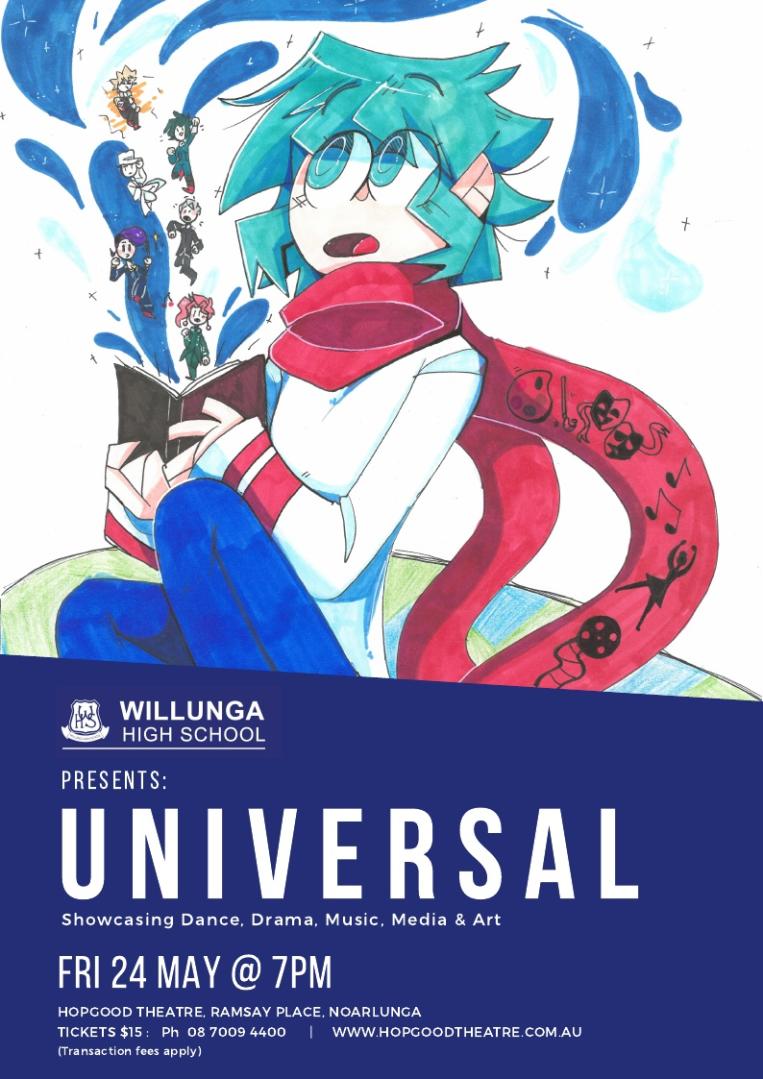 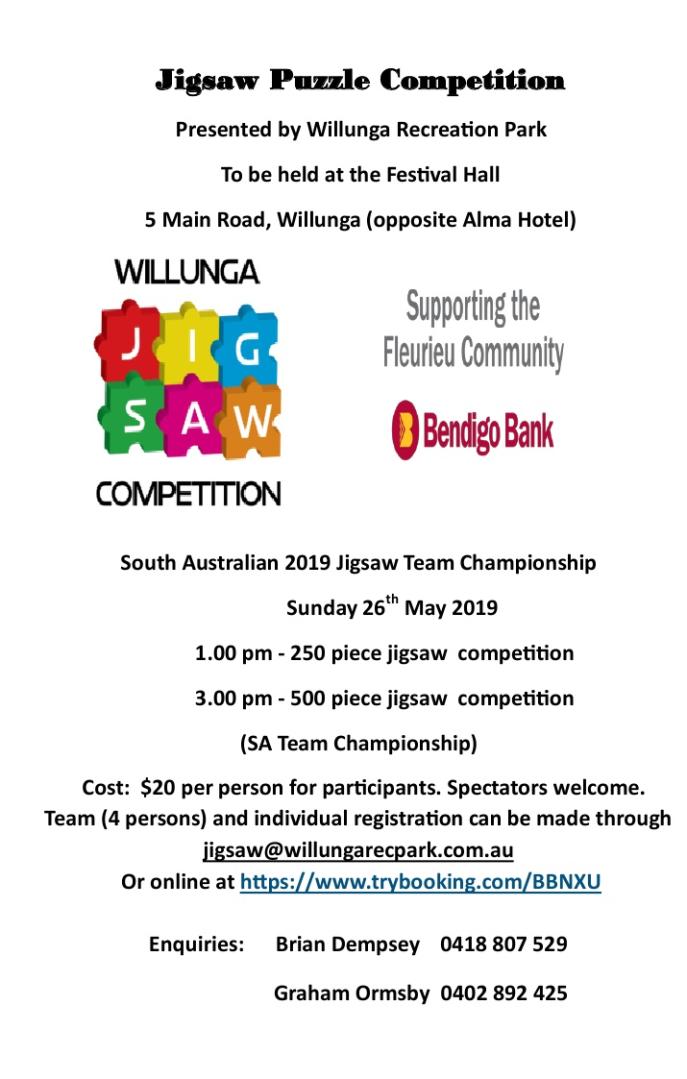 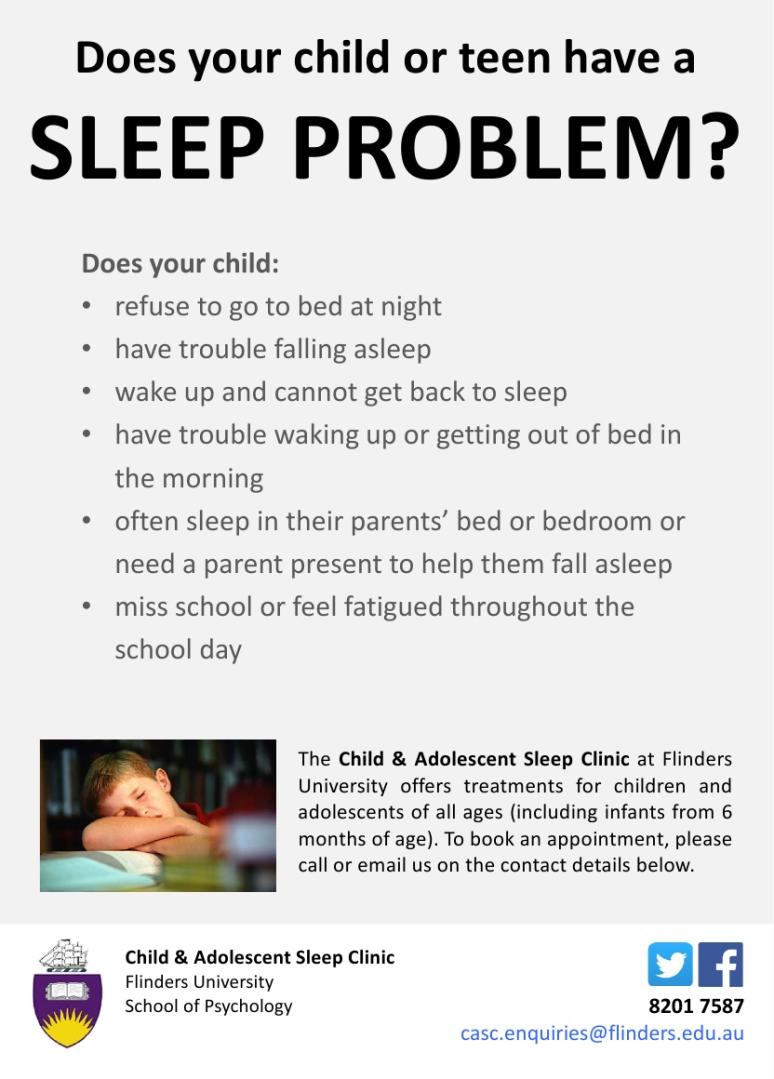 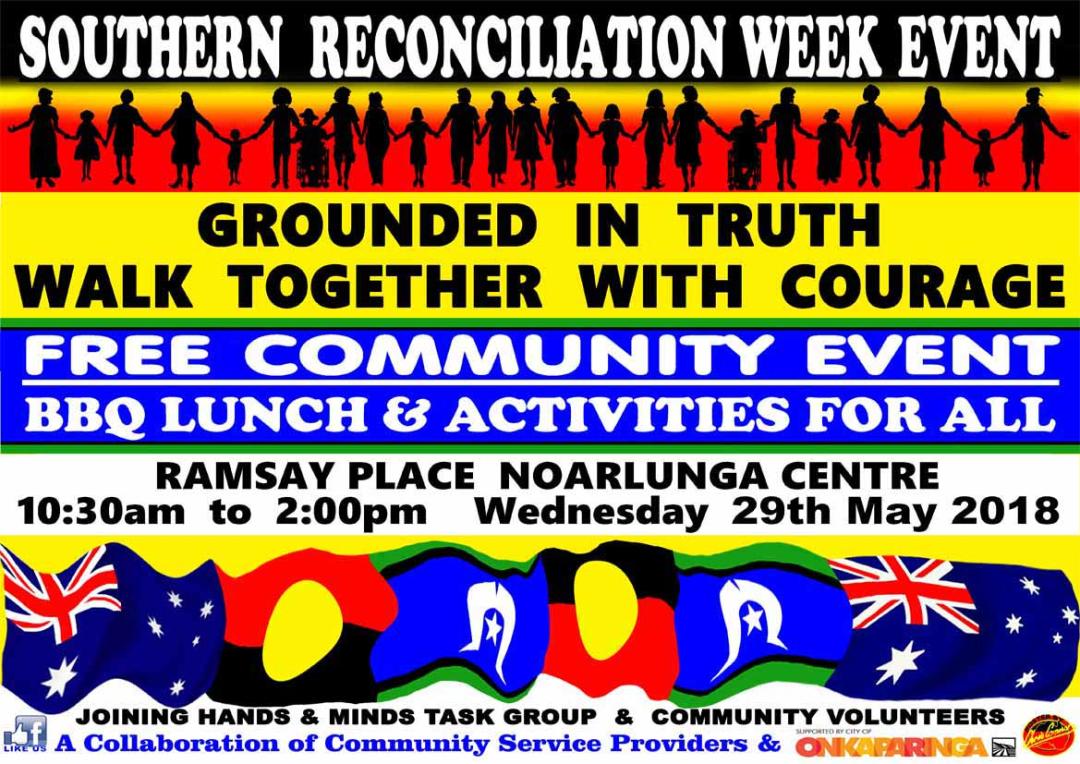 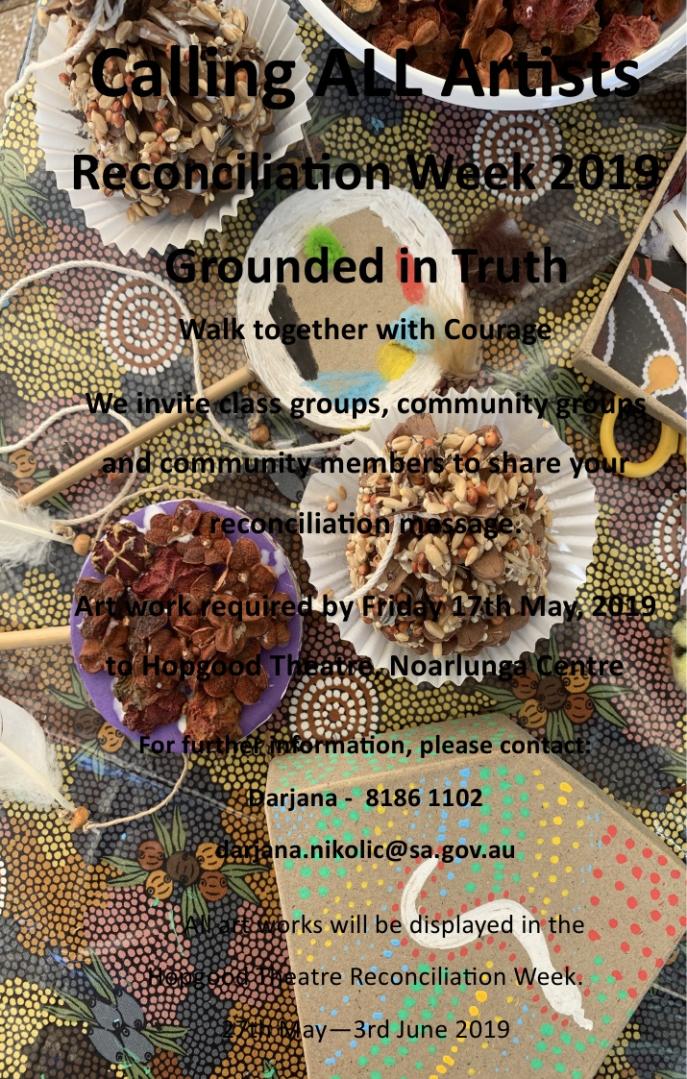 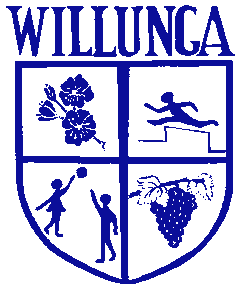